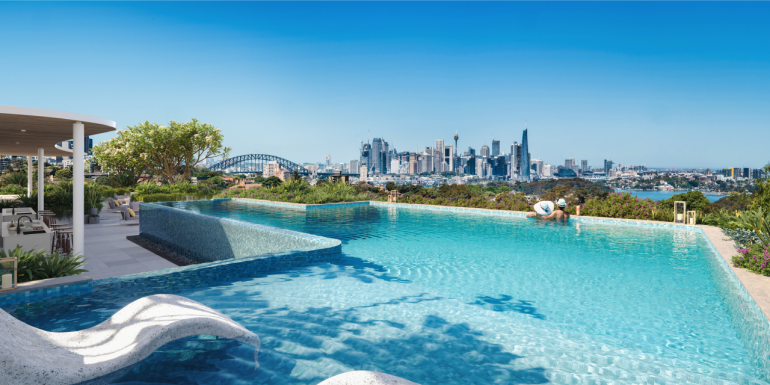 This will be the stunning view from an infinity pool at the top of a proposed luxury Sydney apartment tower set aside for downsizers aged 55 and over.

Already around 50 per cent of the apartments have been sold at the Akoya apartment building at Greenwich on Sydney’s lower north shore.

The Akoya project has been specifically designed for downsizers.

It includes 40 one, two and three bedroom apartments, starting at $1.35 million and ranging up to $4.85 million.

All apartments are strata-titled but, in line with State planning law for seniors housing, include a caveat on the title requiring at least one person occupying the dwelling to be 55 or over.

When complete in early 2023, the eight-storey project will include a wide range of facilities, including a communal wine cellar and private dining room and a rooftop retreat with pool.

It will also include a cafe, in-house bar, private library, theatre, golf simulator and office suites.

An on-site concierge will help keep the residents safe and serviced.

Tim Abbott, director and co-owner of Ray White Projects Lower North Shore, said most of the project’s buyers were coming from a 5-10km radius.

“The developer has come up with a concept here I’ve not seen before,” Mr Abbott said.

The breadth and scope of communal facilities in this project are what you might see in a high-rise, but not usually in a small boutique block of 40 apartments.

“Our buyers are more than likely coming from a big home and no longer want to look after this home, but at the same time find it hard to leave things like a good outdoor space, a pool, nice wine cellar and big dining room.

“In fact, when the cost is spread over 40 different residents, the strata levies in a project such as this are probably less than maintaining a house.”

The project is located on an elevated site formerly occupied by a medical clinic and as a result enjoys views to Gladesville to harbour bridge. It is walking distance to St Leonards station and Royal North Shore Hospital.

At the project’s wine cellar, residents will be provided an individual space to store their personal wine collection.

The space will also be able to function as a private dining room with a finishing kitchen, which can be reserved for that special family gathering or an intimate dinner party.

Residents are also able to purchase a collection of premium office suites, if they are keen to continue working just an elevator ride from home.

Akoya’s most iconic feature however will be its stunning infinity edge lap pool which floats above the harbour with sweeping city views and has its own resort-style sunken sunbeds, submerged within the water.

Mr Abbott said, to date, the larger apartments had been the most popular.

This is a little bit different than I would have imagined it to be and shows me that there are a large number of people who will downsize if they find the right thing,” he said.

The project is being constructed by the Stevens Group, which has already completed a number of other downsizer projects, and financed by NGS Super, which services workers in the education and community sectors.

Akoya's construction comes after the publication of a report by KnightFrank last week which found that downsizers are dominating market activity in the top five per cent of the capital city apartment market.

A Western Sydney retirement living project named after a fam… 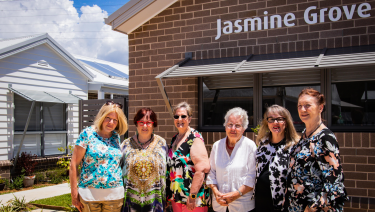 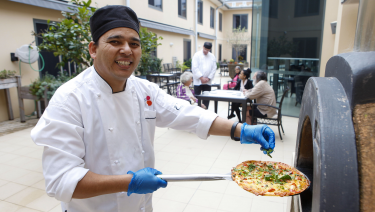 A program to bring the delicious food flavours of the world … 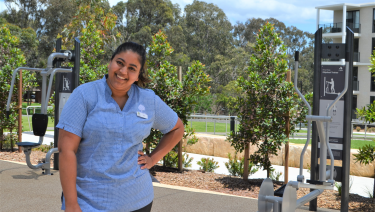 As much as Les Gilbert loved his large suburban home - espec… 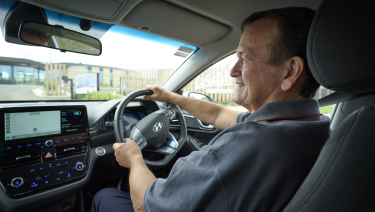 Shared electric cars are becoming a popular, sustainable an…

In a move that is highly relevant for upcoming Christmas fam…